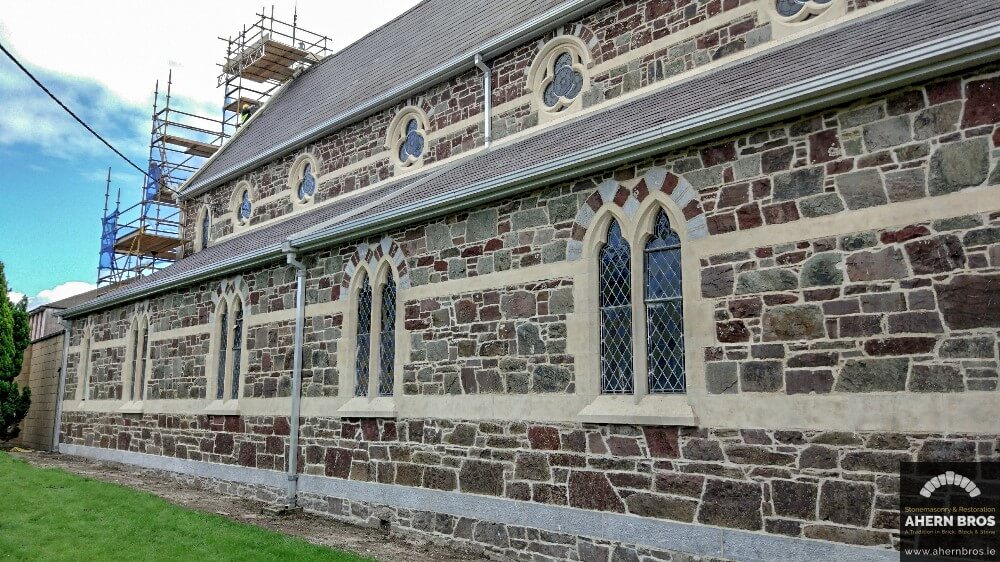 Church History: The present Catholic Church, St. Mary’s , was built about 1869 and of local sandstone. Over the doorway, leading to the nave is the inscription “Do Dhai fo Thearmuin Muire Naomhtha”. The tablet bearing this inscription must have come from the earlier church which must have been on or near the same site.

This earlier church had been designed by the well known Fr. Matt Horgan, while he was curate in Carrigtwohill. Windele, who was at Mass in Carrigtwohill on Palm Sunday, 1833, described the people as bringing each one his own branch of palm and holding it up in his hand to be blessed.

A stone on the outside of the East wall of the present church, directly over the High Alter commemorates the memory of Thomas Forrest Esq., donor in perpetuity of the enclosure in which this church is built and is dated 1816. this was taken, evidently from the old church on the same site and built about 1812.

St. Mary’s was built 100 years ago to the day in the Gothic style, from a design furnished by Mr. Ashlin, a Dublin architect, and the execution of the work reflects the greatest credit on the builder, Mr. Newstead of Fermoy.

The town of Carrigtwohill has in its little Church a gem of architecture, a building which testifies to the piety and charity of those who aided in its erection.